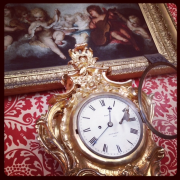 Robin Ward is a unique musician in that he performs on his own hand-crafted instruments and is one of only a handful of people in the world who play the triple harp professionally. Originally from New Zealand, Robin predominantly performs as a soloist and is currently based in the United Kingdom.

In 2009, Robin released his first solo CD, No Pedals Attached and he is currently working on his second. His programme will include medieval, Renaissance, Baroque and modern pieces for various harps in his collection.

Strawberries and bubbly included after.