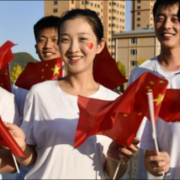 WEBINAR: When the Western concept of "true love” first came to China at the beginning of the twentieth century, China’s New Culturalists critiqued its absence in a traditional arranged marriage. They argued for the abolishment of traditional family norms as an integral part of modernizing the Chinese nation. Since the marketization of the 1980s, romantic love has resurfaced as a hot topic in popular debates. This can be seen as a sign of newly found personal freedom. However, alongside the Confucian revival since the millennium, romantic love has appeared to be reframed to be a part of the “traditional Chinese virtues” of family life.

The research for this talk analyzes the instrumentalization of romantic love and how it is incorporated within the state’s various propaganda materials under the current administration. Illustrated with examples of various role models erected by the state, the research asks who is deemed as "lovable" and who "love-able" in these discourses, and how different kinds of "love" relate to each other, thereby defining Chinese or non-Chinese. Through this, the humanistic turn in the CCP’s propaganda strategies centering around individual desires is clear and has been designed to be emotionally responsive to the public in the 21st century. This talk will examine and unpack the motivations and consequences of these strategies and analyse the varying understandings of the concept of love in modern China.

Biography: Dr Kailing Xie is a lecturer in International Development at the University of Birmingham. Her work investigates the underlying social, cultural and political tensions underpinning China’s economic success through the lens of gender. Her recent monography, Embodying middle class gender aspirations: perspectives from China’s privileged young women, illuminates the centrality of heterosexual marriage as a primary institution in the organisation and reproduction of labour for the market economy, imbued with gendered inequality. Her is currently working on her second monograph on the Politics of love in China in the the 21st Century.