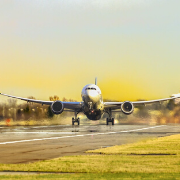 The civil aviation sector has been forecast to grow at the rate of ~5% per year for the foreseeable future. There are increasing concerns about the impact of aircraft emissions on local air quality, health, and climate change. Aircraft engines are a unique source of emissions both at ground level in the urban environment and at cruise level altitudes. The characteristics of aircraft engine emissions are distinct from other sources and have been shown to vary with engine type, fuel composition, and engine thrust setting.

The International Civil Aviation Organization (ICAO) Council’s Committee on Aviation Environmental Protection (CAEP) has developed regulatory standards to limit or reduce the impact of aviation emissions on local air quality and aviation greenhouse gas emissions on the global climate. This includes a new regulatory standard for non-volatile Particulate Matter (nvPM) number and mass-based emissions from civil aviation aircraft engines > 26.7kN thrust. In this specific context, nvPM is defined as the emitted particles at the aircraft engine exhaust nozzle exit plane that do not volatilize below a temperature of 350°C. The development of the standardized sampling and measurement methodology to be used for aircraft engine emission certification will be discussed. There is also a large effort underway worldwide to reduce the environmental impacts of aviation through the use of sustainable alternative fuels. Alternative fuels blended with conventional Jet A/Jet A-1 (up to 50%) have been approved for use in the commercial aviation sector. The development of a new international regulatory standard for nvPM emissions from civil aviation aircraft engines will be discussed in the context of changes in jet fuel composition.