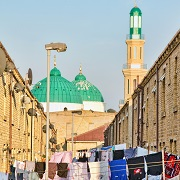 PhD candidate Magda Borkowska presents her study which firstly, aims at investigating if and when ethnic group grievances, ethnic sentiments and involvement in ethnic associations have a positive effect on political participation (group consciousness perspective). Secondly, it investigates whether higher political involvement is linked to identification with Britain, positive evaluations of British institutions and involvement in mainstream associations (assimilation perspective). The study looks at the five main British ethnic groups: Pakistanis, Bangladeshis, Indians, Caribbeans and Africans. The results show that ethnic group grievances have a significant impact on unconventional (non-electoral) political action and on shaping political preferences but are less useful for explaining electoral participation. Moreover, it seems that grievances, ethnic sentiments and involvement in ethnic associations are more powerful predictors of political involvement for the second and subsequent generations of ethnic minorities than for the first generation. On the other hand, British identification and positive evaluations of British institutions have a significant positive effect, although mainly for conventional (electoral) participation. The main contribution of the paper is that it demonstrates that the group consciousness and assimilation approaches are complementary theoretical perspectives, not, as is commonly believed, incompatible competitors.

The empirical analyses were conducted using the 2010 Ethnic Minority British Election Study, which is the first representative survey on the political attitudes and behaviour of the main ethnic minority groups in the UK. Statistical analysis consists of a series of logistic regression models and structural equation models.