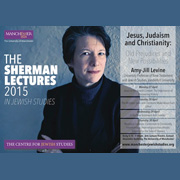 Jews who believe in Jesus of Nazareth as Lord and Saviour have, from the first-century to the present, been regarded by the majority Jewish community as best misguided and, at worse, as apostates and traitors. Jews who marry Christians have been rejected by their family and community; intermarried couples today may struggle with how to raise their children: as Jews, as Christians, as neither… This lecture explores the major religious tensions in Jewish-Christian dialogue today and asks how we achieve shalom bayit (peace in the household) without sacrificing the particulars of our own traditions on the altar of inter-religious sensitivity.