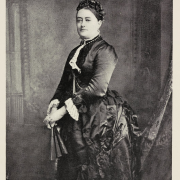 This talk will outline Elizabeth's research on the book collecting and cultural philanthropy of Enriqueta Rylands, founder of the John Rylands Library, focussing on relating her motivations and practices to those of American women art collectors of the same period.

The Earls of Crawford and their Manuscript Collections Presentation by: John Hodgson - Manuscripts and Archives Manager

This talk will outline John's research for a PhD on the earls of Crawford, whose superlative collection of manuscripts was purchased by Enriqueta Rylands in 1901. In particular he will consider their engagement with Italy and their emulation of the Medici family of Florence.

Biography: Elizabeth is a Part-time manuscript curator and archivist responsible for Non-Western manuscripts at the John Rylands Library. In October 2015 will begin part-time PhD in Museum Studies, funded by the AHRC titled: 'Enriqueta Rylands: A Study of Private Collecting and Public Philanthropy, 1889-1908'.

Biography: John Hodgson holds a first degree in Classics and an MA in Archive Administration from the University of Liverpool. He is currently reading for a PhD on the 25th and 26th Earls of Crawford and the development of their manuscript collections, purchased by The John Rylands Library founder Enriqueta Rylands in 1901. John has an extensive knowledge of the Special Collections across a range of formats and subject areas.