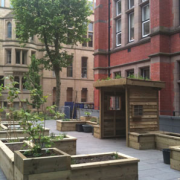 6-8pm. This panel debate is part of The Festival of Transition, a joint project of nef, Transition Network and others - a series of events, talks and walks happening up and down the country, culminating in a nationwide day of action and experimentation on 20-21 June 2012. It’s an opportunity to think positively about how our lives could change as we adapt to the end of cheap fossil fuels, address the threat of runaway climate change and deal with realities of a failed financial system.

What if… Manchester was sustainable?

Once upon a time, Havana, like Manchester, was a city dependent on fossil fuels. But after the collapse of the Soviet Union, the oil supply rapidly dried up, and almost overnight, Cuba faced a major food and transportation crisis.

Havana by necessity had to make the transition to being a sustainable city. Now, it has almost 200 urban allotments, helping the country to become 90% self-sufficient in fruit and vegetables, and hitchhiking and carpooling are commonplace.

As the oil runs out and we address the threat of climate change, how will Manchester have to change? What does a sustainable Manchester look like - where does its food come from, and how do people get around? Can we learn lessons from Havana?