‘German/Exile: On the Jewish Longing for Europe’ Seminar 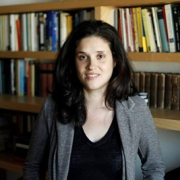 The talk will present a cultural history of the notion that German-speaking Jews have been in exile from their homeland. The persecution of European Jews in the twentieth century is often taken as the lethal outcome of Jews’ diasporic existence. However, Jewish emigration and flight from Europe have also elicited cultural representations of homesickness for lost and still desired homelands. The sentiment of diasporic melancholia pertaining to one’s departure from Europe was an uncanny affect among German-Jews who felt estranged from their new places of residence. This was especially true for immigrants who faced the demanding socioeconomic conditions in Palestine/Israel, like Else Lasker-Schüler, Arnold Zweig and Richard Koebner. Feelings of affinity to German culture alienated them from the surrounding community that exhibited vibrant national sentiments. The talk will investigate literature and artworks that depict the irony that ensues when, for some individuals, the Jewish exile in Europe became an exile from Europe. According to Hannah Arendt’s influential argument, the humanness of the modern individual was revealed—with the flight of masses from Europe—to be not the a priori condition for political inclusion but its product. Literary and artistic representations of a Jewish return to Europe present a restorative act of homecoming, which poses a constant challenge to political thought.

Bio: Yael Almog is an Assistant Professor of German at the School of Modern Languages and Cultures at Durham University. She previously held research positions in Berlin, Göttingen and Frankfurt am Main. Her recent monograph Secularism and Hermeneutics (The University of Pennsylvania Press, 2019) examines exegesis as embedded in confessional belonging and challenges the modern presumption that interpretation is indifferent to religious concerns. Her research explores links between theology and literary theory; secularism and critical theory; and literature and political philosophy.