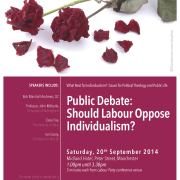 While in opposition in the 1990s, New Labour drew great inspiration from the Communitarian politics of the United States, which emphasised personal responsibility and not merely individual rights. This prompted Labour MPs and thinkers to re-consider the Christian ethical heritage of Labour as the party of ‘community’ against ‘Tory individualism’. Once again in opposition, Labour is championing the rhetoric of collective responsibility as an antidote to social inequalityand political disenchantment. This debate asks: Should Labour oppose individualism? And what might be the political consequences of such opposition? In the orbit of these questions is a discussion of what individualism is. Are all forms of individualism ‘bad’ and if not, what resources might the Labour tradition have which might help us tell the difference? Is the ‘community’ an answer to the social problems of how our time, or is an over-emphasis upon ‘community’ part of the problem? This fringe event explores these central issues from a number of angles; theological, political and economic- brought into focus by our four speakers: Bob Marshall Andrews, John Milbank, Clare Fox and Ian Geary.