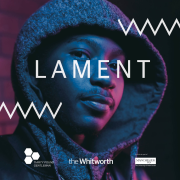 A film produced by Thirty Pound Gentleman in response to Steve McQueen's Ashes. Directed by Tarnish Vision, with support from creative team Gaika (Artist and Political editor for Dazed and Confused), Zed Bias, Reece Williams, and Zoraya Jackson, LAMENT explores the lives, hopes and dreams of a group of young men form Manchester who provide a powerful and moving narrative in this abstract and stylish short film. Rooted in a philosophy of being, and living, and creating in the same hardness, the same grit, the same city, the same Manchester that suffers urban violence and cliched city problems, can also produce powerful talent in young men who are just as prepared to embrace the wildness of their environment as they are to escape it. Making music, film, art, acting and signing, and still being in this same Manchester, their Manchester.

Part of our Thursday Lates programme - eclectic late-night openings until 9pm every Thursday, with music, performances, talks and screenings.