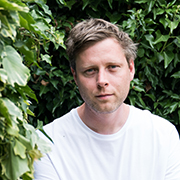 One of the rising stars of British literature, Max Porter’s debut novel Grief is the Thing with Feathers won the Sunday Times / Peters, Fraser + Dunlop Young Writer of the Year, the International Dylan Thomas Prize and the Europese Literatuurprijs. It has been translated into twenty-seven languages and was described as ‘dazzlingly good’ by Robert Macfarlane. The acclaimed stage adaptation of Grief is the Thing with Feathers, starring Cillian Murphy, opens at the Barbican Theatre in March 2019. Max’s second novel, Lanny, is an equally dark, funny, joyous and exhilarating book. Set in an English village, it captures the gossip, good will, mystery and eccentricity of the people that live in it and the people who used to hundreds of years ago. At the heart of the story is an imaginative boy called Lanny, the village artist Pete and Dead Papa Toothwort who has woken from his slumber and is listening, and watching. Join us to hear Max read and discuss his magical stories with Luke Brown, Lecturer in Creative Writing and author of My Biggest Lie. Presented in partnership with Creative Manchester and the Centre for New Writing.

Luke Brown is the author of the novels My Biggest Lie (2014), and North and South (due in 2020). He reviews books for the Financial Times, London Review of Books, Times Literary Supplement and New Statesman. Before beginning his career as an lecturer, Luke worked as a commissioning editor, for the prizewinning small press Tindal Street Press, and later as deputy editor of Granta magazine.

He still works as an editor on a freelance basis for a variety of literary imprints, and arranges the Centre of New Writing's programme of visiting speakers from the publishing industry and book world.