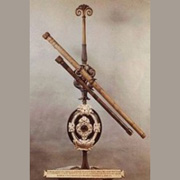 The dialogue between the history of science and the 'rise' of new fictional forms is both seminal and novel in our understanding of the discipline we've come to term 'Golden Age.' 'Fictions of Illusion' measures Galileo's presence in early modern Spanish fiction, especially Cervantes and his contemporaries. By exploring the development of the telescope as a literary device, this presentation touches on a number of events related to its arrival in Habsburg Madrid: the fortunes of optics and astronomy in higher learning and in popular culture, the history of diplomacy, the development of a 'technical' or 'scientific' Spanish, the revival of Classical writers like Tacitus in Spanish satire, and the rise of the collector as a paradigmatic figure of the European Baroque.

This is our 2014 Ramsden / Gibbon-Monypenny Commemorative Lecture, as part of the Spanish and Portuguese Research Seminar Series.

Role: Professor of Spanish, Department of Romance Languages and Literatures