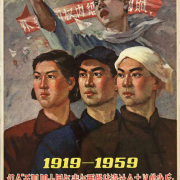 Ritual collective killing was carried out across the People’s Republic during the Cultural Revolution (1966-76). Historians have yet to fully account for its sheer intensity and widespread appeal. What ideological changes allowed ordinary people to continue to buy into the party doctrine of class struggle, so ferociously, two decades after the material basis for class relations were abolished by land reform? One explanation involves what scholars have called a shift from customary morality to communist morality. But what was the intellectual groundwork required for people to embrace a new moral framework with such vigor in 1950s and 1960s China?

This talk explores the intellectual genealogy of such a transformation, tracing it back to the intersection of May Fourth activism and the 1920s social survey movement. The talk identifies the seeds of continued class violence under Maoism to the mundane phenomenon of May Fourth writing on the nature of rural social relations, governance and morality during times of crisis half a century earlier. It does this by isolating particular famine and earthquake events around the time of the founding of the Chinese Communist Party, in 1921, to reveal the mechanics of cultural memory formation of rural life. This cultural formation, what I call revolutionary memory, was a precondition for popular acceptance of a dramatic Manichean struggle between good and evil sought by communist morality and the ritual killing of the Cultural Revolution.

Please note, You must register on Eventbrite to attend this seminar (link attached)