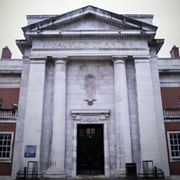 A talk by Dr Matthew Philpotts (Department of German Studies) - part of the School of Arts, Languages and Cultures open lecture series "Meet the Researchers".

In this lecture, I will present my research into the way museums select and present the German experience of dictatorship at three former National Socialist sites in eastern Germany:

As well as their geographical location in the eastern German state of Mecklenburg-Vorpommern, the sites share three important features. Firstly, in all three cases the original purpose of the site advanced not only the specific aims of the Nazi regime and its ideology, but also an aspect of social or scientific modernity: mass tourism (Prora); rocket technology and space travel (Peenemünde); and medicine and applied genetics (Alt-Rehse). Secondly, the surviving infrastructure at all three sites was re-used after 1945 in the German Democratic Republic (GDR), the subsequent East German socialist dictatorship. And, finally, at all three sites the original buildings and their remains are now being preserved or commemorated in some form of museum and related heritage practices. These shared features make these sites an intriguing case study through which to examine how museums and heritage construct narratives about the German past. My research explores the construction of those narratives through a variety of media and on a variety of levels: the personal narratives of individual perpetrators, victims, and witnesses; the public narratives of German ‘collective memory’; and the conceptual narratives (e.g. totalitarianism, resistance, modernisation) through which historians have sought to make sense of the twentieth-century German dictatorships and their relationship to our modern, democratic present.