S-curves and mechanisms of propagation in language change 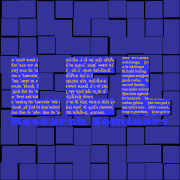 Abstract: "A variety of mechanisms have been proposed in sociolinguistics for the propagation of an innovation through the speech community. The complexity of social systems makes it difficult to evaluate the different mechanisms empirically. We take an approach where the different mechanisms can be understood in terms of different symmetries (equivalences) that may be present or absent. For example, an account that appeals to social prestige of specific linguistic behaviour implies an asymmetry between different variants of a linguistic variable; alternatively, an account that appeals to social network structure implies an asymmetry between the identity of an innovator. A fairly general mathematical framework is then used to show that these symmetries impose constraints on how the community-wide frequency of an innovation can change over time, and in particular we show that the widely-observed empirical pattern of an S-curve temporal trajectory of change can be captured only if the mechanisms for propagation include differential weighting of the competing variants in a change, except under highly specialized circumstances that probably do not hold in speech communities in general."