Making Monuments on Rapa Nui. The Statues from Easter Island 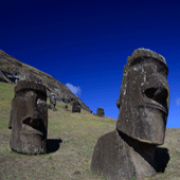 The monumental stone statues of Rapa Nui (named Easter Island by European explorers) in the Pacific are some of the most widely recognised archaeological objects in the world. Based on fieldwork on the island by Professor Colin Richards, an archaeologist at The University of Manchester, this exhibition takes a fresh look at these impressive statues, or ‘moai’.

Making Monuments looks at how the statues were made, the role they played in the lives of the islanders, how they were quarried and transported across the island, and what they mean.

It also deconstructs some of the myths about the island, and discusses current theories about the decline of this astonishing culture.

The exhibition includes one of the statues, Moai Hava, which was collected from Rapa Nui in 1868, and is on loan from the British Museum.