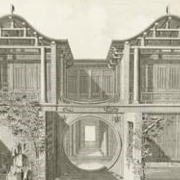 This talk explores the relationship between China and Northern Europe from the perspective of plants, gardens, and garden architecture, focusing particularly on Scotland, Sweden, and Russia. The chinoiserie designs of the Scottish-Swedish architect Sir William Chambers (1723-1796) are well known. Less well known is the influence of chinoiserie on 18th-century parks and gardens in Scandinavia, where the Swedish royal family created the ‘Chinese pavilion’ (Kina slott) at Drottningholm, and in Russia, where the Scottish architect Charles Cameron (1745-1812) became a leading exponent of chinoiserie.

The great Swedish botanist Carl von Linné (1707-1778) also took a deep interest in Chinese plants brought back to Europe; later, notable plant-hunters in China included George Forrest (1873-1932), whose work led to important collaborations between the Royal Botanic Gardens Edinburgh and botanical institutions in China. The talk concludes by considering why Scotland and Sweden, two relatively small northern European countries, played such an important role in conveying knowledge of Chinese plants and gardens to the Western world.

Biography: Alison Hardie is an Honorary Research Fellow at the University of Leeds, having retired in 2015 as a Senior Lecturer in Chinese Studies. She holds degrees in Classics from the University of Oxford and in Chinese from the University of Edinburgh, and a doctorate from the University of Sussex. Her main research interest is in the social and cultural history of early modern China. She is the translator of Ji Cheng’s 17th-century garden manual, The Craft of Gardens (1988, repr. 2012), revised the 3rd edition of Maggie Keswick’s The Chinese Garden: History, Art and Architecture (2003), and has written extensively on Chinese garden history.