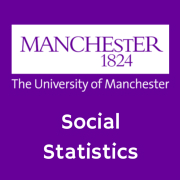 Join us at 4pm (BST) on 4 May 2021! Registration link: http://bit.ly/socstat0521 Please register using your full name and your email address.

Even in diverse schools that provide opportunities for interreligious friendships, Muslim youth disproportionally tend to be friends with Muslims rather than non-Muslims. Echoing broader debates about minorities’ self-segregation versus exclusion by majority group members, a key question is whether religious friendship segregation arises because of Muslims’ in-group bias or because of non-Muslims’ reluctance to befriend them. We suggest that the answer differs for Muslim boys and girls. Building on past research, we propose that religious in-group bias is stronger for Muslim girls than for Muslim boys. Conversely, we expect non-Muslim youth to be more open to befriend Muslim girls than Muslim boys. Applying stochastic actor-oriented models of network dynamics to large-scale longitudinal data of friendship networks in German schools, we find that Muslim girls indeed have a strong in-group bias, whereas non-Muslim youth are not reluctant to be friends with them. Muslim boys, by contrast, have a much weaker in-group bias, but non-Muslim youth are less willing to be friends with them rather than with non-Muslims. A simulation analysis demonstrates that these gendered individual-level processes result in comparable aggregate patterns of friendship segregation among Muslim boys and girls.

Lars Leszczensky is a postdoctoral research fellow at the Mannheim Centre for European Social Research (MZES) at the University of Mannheim. His research interests include intergroup relations, friendship formation, collective identities, and social network analysis. He is currently working on a project that seeks to improve our understanding of the mechanisms that drive the social–emotional integration of Muslim youth in Europe by combining insights from longitudinal social network analysis, group discussions, and survey experiments.