From Epic to Gnostic: Observations on Dynamics of Change in Persian Poetry 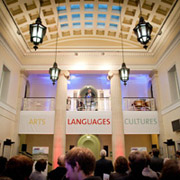 As we know it today, Persian literature emerges in the tenth century CE with a dominant discourse that tends to explore the world and man’s surroundings, to look, question and explore the phenomena of external nature, of human life, and of relations among humans and other inhabitants and phenomena of the earth. In time, primarily through the 12th century, this dynamic changes gradually and begins to get into a more complex expressive system in which explorations are directed more toward understanding the “interior” and hidden aspects of objects and relations, animals and humans. This is the process that leads from direct, objective observations to contemplations of the “nafs” in the mystic tradition, and is exemplified most visibly by the type of struggle that personages such as `Attar’s Shaykh San`an face, when compared to the divs, dragons and demons that a hero like Rostam confronts; or one that leads from the kind of figuration we see in the Shahnameh’s Simorgh to that in the Conference of the Birds. I have called this change “interiorization”, and in my talk I will present examples of this change and share my thoughts on its causes and consequences, as well as its ultimate significance for conceptualizing a new historiography of Persian literature.