The Life of Herodotus: Traditions and Interpretations 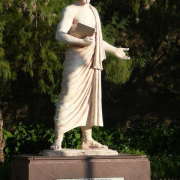 This paper outlines and analyses ancient traditions about Herodotus’ life for their potential to yield information about the reception of the Histories. Multiple, and sometimes conflicting, biographical claims were made connecting Herodotus with different cities and regions round the Greek-speaking world. Some of these are historically problematic. Biographical details about Herodotus were considered important to communities because it was thought they could explain the way a region was portrayed in the Histories, and because establishing positive ties with the famed historian was a means of conferring honour on a community and stoking local pride in its past. Competing claims - for example, traditions locating Herodotus’ tomb variously at Thurii, Pella, and Athens - are testimony to Herodotus’ importance in different parts of the Greek-speaking world. The changed historical circumstances in the Hellenistic period (when it seems most likely that the extant traditions about Herodotus’ life were first recorded) can help to explain why particular traditions were perpetuated, and quite possibly why they arose or were ‘invented’.