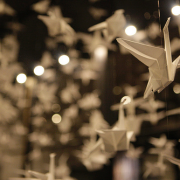 Manchester remembers the events of Hiroshima and Nagasaki 75 years on

To commemorate the dropping of the atomic bombs, on Hiroshima and Nagasaki, Manchester will pay tribute to the lives lost and the lasting impact it has had.

The total loss of life of the two bombings is estimated to be up to 135,000, though the effects would be felt for generations to come.

On 6 August at 08:15am Manchester encourages all to hold a minute of silent reflection to all those who were killed in the bomb attacks.

In recent years, Manchester City Council and Mayors for Peace have hosted commemoration events with Manchester Museum for anniversaries of the event. However, given the current Covid-19 pandemic the commemoration will take place online via the City Council’s website and social media.

The online programme will include a poem from Lemn Sissay MBE, Chancellor of University of Manchester, readings by officials, reading from Manchester Museum's Living World's gallery, a choir service and a step by step guide on how to fold an origami peace crane.

Manchester City Council is a founding member and the host of the Nuclear Free Local Authorities (NFLA). It is also a Vice President of the Hiroshima-led Mayors for Peace. Both organisations have been working for over three decades to promote multilateral nuclear disarmament.

The link to the virtual resources will go live at 5pm on Wednesday 5 August www.manchester.gov.uk/LetThereBePeace