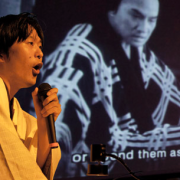 In the 1920s no screening of a film was complete without a narrator: Katsudo benshi or simply benshi were stars that often commanded huge salaries for their masterful use of voice for both subtle effects and dramatic fireworks of emotion. Benshi accompanied screenings with highly expressive performances that included narrating both the story and the characters’ dialogue, often giving their own outrageous twists and interpretations to the action unfolding on the screen. We are thrilled to welcome the renowned benshi Ichir? Kataoka from japan for an evening of captivating live interpretations of Japanese silent films. Mr. Kataoka will present Tokyo March (1929) by Japanese master director Kenji Mizoguchi as well as a selection of classic animated short films. Mr. Kataoka’s original narration will be subtitled in English, so everyone is welcome to experience this fascinating and entertaining way of enjoying films like people did in Japan when cinema was still young. Ichir? Kataoka graduated from the Nihon University College of Art and began training under the celebrated veteran benshi in Japan, Midori Sawato, in 2002. He is the most well-known benshi of his generation, a rising star that is also the most internationally active benshi, having given performances in countries such as Croatia, Germany and Australia. Performing a broad repertoire of styles, Mr. Kataoka is known for not only performing with the more “traditional” benshi accompaniment of a small ensemble or select Japanese instruments, but also has been open to working with experimental or electronic music. He has appeared as a benshi in various films and also works as a voice actor for animation and video games.