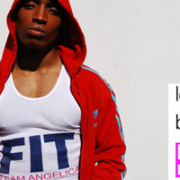 Straight? Gay? Bi? Whatever. Homophobia hurts us all. We all belong…we all FIT.

FIT is a fast-paced youth comedy-drama set in an inner city sixth form college that follows the lives of six 17 year olds who are on their last chance A-level before getting excluded for various reasons: Dance and Drama, taught by out and proud flamboyant but-firm tutor Loris Dawes, played by writer/director, Rikki Beadle-Blair. Through a series of plot twists, the teenagers struggle to fit in, stand out, discover their own identities and accept each other.

FIT is a feature film made as an entertainment initiative to tackle the complex issues of homophobia and bullying. Surprisingly humourous, shockingly honest and startlingly human - this is comedy drama for the YouTube generation.

Watch the video trailer at: http://www.youtube.com/watch?v=_mtG2GR_lf4

FURTHER INFORMATION ABOUT THE SCREENING

FURTHER INFORMATION FOR TEACHERS AND STUDENTS

Notes for teachers and students can be found at: http://www.stonewall.org.uk/at_school/fit/default.asp

FIT is a Team Angelica film, presented by Stonewall in association with The Shorthouse Organisation.

Written and directed by Rikki Beadle-Blair, whose many credits include the film and stage versions of Stonewall, Channel 4’s Metrosexuality, and Bashment and Familyman at Theatre Royal Stratford East.

The original stage version of FIT was commissioned by Manchester’s Queer Up North and Stonewall and was developed as a work-in-progress at Contact in May 2007 before returning as part of a full autumn tour in August 2007.

The show has been performed to over 20,000 young people at venues and schools in Manchester (Contact), Glasgow (CCA), London (The Drill Hall), Birmingham (Birmingham Repertory Theatre), Edinburgh (St.Stephen’s) and Liverpool (Unity Theatre) as well as schools in Bournemouth, and Brighton. The stage version has also been supported by Homotopia , The Drill Hall and JP Morgan.