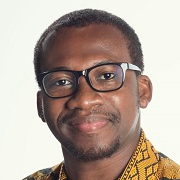 The Global Development Institute is pleased to host Associate Professor Franklin Obeng-Odoom as part of the GDI Lecture Series, talking about: Property, institutions, and social stratification in Africa

While it is intrinsically important to explain and, ultimately, try to address social stratification in Africa, these aspirations have not yet been satisfactorily executed. Human capital explanations can be enticing, especially when they appear to explain the meteoric rise of the Asian Tigers in terms of their so-called cultures of hard work. Attempting to explain Africa’s unequal position in the world system this way is common, as is conceptualising the problem in terms of the absence of physical capital and the presence, or dominance, of natural resources. In turn, it is quite usual to posit the need to reduce the transaction costs of transnational corporations, which presumably work to resolve the challenges of development in Africa. In practice, however, neither African culture, poor human capital, inadequate physical capital, nor the natural resource curse explains Africa’s underdevelopment. None of these can sufficiently explain the startling economic inequalities in Africa between various social groups, nor those between Africa and the rest of the world. In this regard, the idea that certain cultures of land either hinder, or would enable ‘Africa’s catch up’, are also mistaken. Although the reverse case – that African cultures are pristine – is sometimes used to counter this central thesis, it is similarly unconvincing. The spectre of Manicheanism, that is, expressing the African condition according to a dichotomy of either cultural pessimism or cultural triumphalism, is limiting.

Obeng-Odoom has made various contributions to political economy. He is the author of five books, including Oiling the Urban Economy; The Myth of Privatizing Nature; Property, Institutions, and Social Stratification; and Reconstructing Urban Economics, which is listed in the top five entries for the Egon-Matzner-Award for Socio-Economics in 2017. He guest-edited the special issue of the Journal of Australian Political Economy on 'Global Economic Inequalities and Development', a controversial analysis of which forced the International Monetary Fund to issue an official statement in defence of its policies. Obeng-Odoom is Associate Editor of the Forum for Social Economics, Editor of African Review of Economics and Finance, and Series Editor of Edinburgh Studies in Urban Political Economy.

The Global Development Lecture Series brings experts involved in global development to The University of Manchester. It aims to facilitate dialogue and discussion, providing a space for leading development thinkers to share their latest research and ideas. Lectures are followed by an audience Q&A.