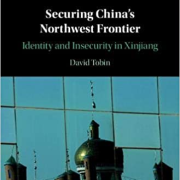 Webinar: David Tobin will be introducing and discussing his new book, Securing China's Northwest Frontier: Identity and Insecurity in Xinjiang

In the first study to incorporate majority Han and minority Uyghur perspectives on ethnic relations in Xinjiang following mass violence during July 2009, David Tobin analyses how official policy shapes identity and security dynamics on China's northwest frontier. He explores how the 2009 violence unfolded and how the party-state responded to ask how official identity narratives and security policies shape practices on the ground.

Combining ethnographic methodology with discourse analysis and participant-observation with in-depth interviews, Tobin examines how Han and Uyghurs interpret and reinterpret Chinese nation-building. He concludes that by treating Chinese identity as a security matter, the party-state exacerbates cycles of violence between Han and Uyghurs who increasingly understand each other as threats.

Biography: David Tobin is a Hallsworth Research Fellow in the Political Economy of China. His research focuses on the relationship between identity and security in China's ethnic politics.