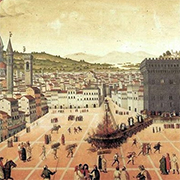 The period spanning the years 1350-1700 saw a massive expansion in urban populations, transforming social formations. Changes and developments in medieval and early modern cities were intricately tied up with trade, migration, politics, economics, shifting possibilities for social mobility, and the growth of commodity culture; the relationships of individuals and communities to, and in, the city were frequently characterised by alienation and disorder. The early meanings of ‘strange’ as foreign or alien, and also new, wondrous, and astonishing, point towards premodern cities as sites of danger, possibility, conflict, and discovery.

Cities of Strangeness, 1350-1700 is an interdisciplinary one-day conference exploring the centrality of strangeness and estrangement in literary, artistic, and cultural representations of the premodern city. To what extent is the experience of the premodern city characterised by estrangement or alienation? How did the growth and transformation of urban spaces across the late medieval and early modern period alter social identities and formations? What were the relationships between a city and its strangers? How do literature and art respond to cities in strange ways?

The programme is still to be confirmed but proposals were invited for papers that explore any of the following, or related topics, in relation to late medieval and early modern cities:

You can expect papers from scholars working in literature, visual cultures, history, religious studies, urbanism, and other related areas that take a cross-period or interdisciplinary approach.

The venue is wheelchair accessible, with accessible, gender-neutral toilets and designated parking bays. Information about prayer rooms, dietary requirements, assistance dogs, hearing loops, transport and accommodation can be found on the website (citiesofstrangeness.wordpress.com/accessibility); please contact the organisers if there is anything you would like to discuss in advance.

Lunch, refreshments, and a wine reception will be provided. Registration will open in early February 2018.

The conference is kindly sponsored by artsmethods@manchester.