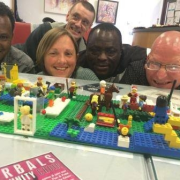 Seminar abstract: This talk draws on emerging qualitative research with refugees, asylum seekers (R-AS) and more settled residents, in collaboration with a voluntary sector organisation in Glasgow, Scotland. It focusses on the emotional geographies of social interactions produced through organisational spaces, namely the weekly Drop-In. The organisation’s intervention is framed in terms of ‘bridging the gap’ between R-AS and Scottish citizens. In reality, encounters between people at the volunteer-led Drop-In involve difficult negotiations of intersectional differences, between and across age, ethnicity, gender, sexuality, religion, physical and mental health capabilities, housing context and so on. Simultaneously, volunteers and service users generally share a socio-economic position in Glasgow, in largely marginalised and fragile positions. Emotional interactions emerge through the ebb and flow of talking and listening, playing games, doing arts and crafts, and preparing and eating food. These activities, while ostensibly ‘organised’ by volunteers, are more often chaotic and messy, yet relationships are fostered, co-constituted though desires to engage with one another, to build local community, and to (re)make society at the local level. The paper develops the concept of emotional citizenry as social relations ‘already practised’, and thus exceeding, a fixed status owned/achieved by some and not others; rather as a process grounded in the complexities of places, lives and feelings. It poses questions as to how grassroots initiatives may disrupt scalar politics and dominant discourses, and the role of third sector organisations in facilitating collective change.