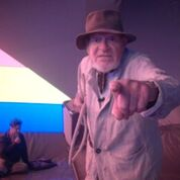 An experimental film and inflatable project

Founded by Ken Turner and his wife Mary Turner in 1968, Action Space used large inflatable sculptures to create interventions into public spaces. By bringing together artists, performers, dancers, painters and musicians, the movement sought to produce cultural democratic spaces for art, education and creative play outside of the restrictive space of the gallery system.

This film looks at those years between 1968 and 1978, exploring contemporary and pertinent issues around public/private space, individual/collective creativity, community and responsibility, emancipation and play. It features archive footage alongside discussions with key members of the movement, present-day writers and theorists. The film is based around the making of a new inflatable sculpture within which contemporary performances and happenings are staged.

Special showing of this film as part of symposium ‘Cultural Democracy yesterday, today and tomorrow’. Followed by Q&A with the director Huw Wahl