Online Talk: Collecting and Displaying China at the National Museum of Scotland 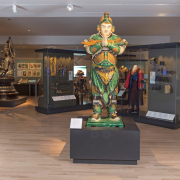 A new East Asia gallery opened at the National Museum of Scotland in February 2019 as the final stage of the Museum’s fifteen-year transformation and renovation. The new gallery presents a display of China, Japan and Korea from past to present across four themes. For its China part, it showcases the Museum’s historical collection as well as pieces from recent key contemporary acquisitions. This presentation will, through a curatorial lens, discuss the processes and challenges of presenting China in a permanent gallery in Scotland.

About the speaker: Dr Qin Cao is Curator of the Chinese collections, including those of the Himalayan and Mongolian regions, and the Korean peninsula. Qin studied Archaeology for her BA at Nanjing University and then her MA at University College London. She obtained a DPhil on the subject of Shang dynasty weapons from the University of Oxford in collaboration with the British Museum. Dr Cao has interned and worked at a number of heritage institutions, including the Bangkok office of UNESCO, Jinsha Site Museum, Chengdu, China and the Ashmolean Museum, Oxford. In 2012, she joined the British Museum as part of their Future Curators programme, and also worked at the Manchester Museum. Her primary interest is Chinese material culture, in particular bronzes of the Shang and Zhou dynasties, and numismatics.