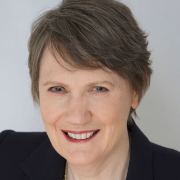 Helen Clark has been a political leader for more than 40 years; she was the first female Prime Minister of New Zealand for nine years and the first female Administrator of the United Nations Development Programme. A key focus of her career has been the empowerment of women and leadership at all levels. According to the World Bank, 155 countries have at least one law that discriminates against women. Given the extent of unpaid work and care burdens, violence against women and gender pay gaps, Clark says women’s leadership is urgently needed to create a more equal world. She will draw on her own experiences in senior leadership but also her observations of women being leaders at all levels around the world and how this can create a more sustainable and just future.

This event is open to members of the public and information on the accessibility of the venue is detailed at this link: https://www.disabledgo.com/access-guide/the-university-of-manchester/simonth-b

Entry is open to all and is free but we encourage you to register for a ticket to guarantee entry: https://www.eventbrite.co.uk/e/helen-clark-gender-equality-as-the-key-to-a-sustainable-world-a-reflection-on-womens-leadership-tickets-49378404136

Biography: Helen Clark was Prime Minister of New Zealand for three successive terms from 1999–2008. She was the first woman to be elected as Prime Minister in New Zealand. In April 2009, Helen Clark became Administrator of the United Nations Development Programme. She was the first woman to lead the organisation, and served two terms there. At the same time, she was Chair of the United Nations Development Group, a committee consisting of all UN funds, programs, agencies, and departments working on development issues. As Administrator, she led UNDP to be ranked the most transparent global development organisation. She completed her tenure in 2017.