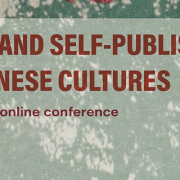 Zines, often forms of do-it-yourself self-published booklets, were thought by many to be a potential casualty of the digital age. Rather than losing their relevance, zines have re-emerged as a profound, powerful, and intimate form of story-telling, information sharing and artistic practice. Furthermore, the rise in digital media may have helped zine scenes grow, with digital formats circulating online, printing services easier to access, greater knowledge about zines, and the ability to edit zines digitally.

Yet, while zines are increasingly popular, published research on zines in Chinese cultures is still limited. This is surprising, as zines in Chinese cultures have been used to tell many academically relevant stories, including stories of protest, migrant lives, diasporic thought, racism, food cultures, gender inequality and LGBTQI+ struggles. Additionally, zines as self-published media circulate transnationally while enabling transnational conversations and solidarity. Zines do all of this while also being a form of self-publishing that can circumvent multiple modes of censorship.

The conference will also host two online zine making workshops. One zine making workshop will be hosted by Hong Kong’s Zine Coop and another by the Shenzhen/NYC based Little Mountain Press. We also hope to compile and circulate a conference zine catalogue, where zine makers can share their zines to conference participants. Through these activities we hope to reflect on the practice and content of zines in Chinese cultures and to inspire participants to make their own zines.

As an emerging area of research, this conference is not limited to ‘zine experts’ (or any other ‘experts’) but seeks to bring interested parties together to imagine new possibilities. This may include, but is not limited to, (i) those researching zines related to Chinese cultures, (ii) scholars of zines more broadly, (iii) scholars of self-published and feminist media related to Chinese cultures and (iv) zine makers.