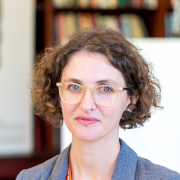 At the outbreak of the current civil war (2013-present) in South Sudan, the United Nations opened its gates to tens of thousands of civilians who were targeted in violence across the country. Intended as a temporary ‘last resort’ to save lives, these Protection of Civilians (POC) sites have existed for the past five years and are now home to 200,000 people living in precarious conditions. Based on 5 months of ethnographic research in Juba POC site (part of a Leverhulme Early Career Fellowship), this paper focuses on funerary cultures and practices of commemoration there, exploring the meaning and motivations behind funeral practice in displacement. Despite extreme hardships, funerals and commemorative events are daily occurrences in the POC, and they take up considerable amounts of energy and resources. I ask what this reveals about the relationship between death, time and uncertainty during ‘crisis’. I argue that within the humanitarian ‘crisis temporality’ of the POC, funerals are spaces which allow displaced people to articulate alternative idioms of continuity and community self-care. For bereaved families, commemorative events are opportunities to craft an appropriate future for the deceased and reaffirm relationships of responsibility between the living and the dead which have been strained by civil war.