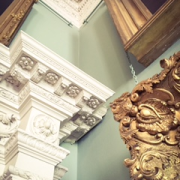 Rosie Lomas graduated from the Guildhall School of Music & Drama in 2011 with a distinction in her final recital.

She made her operatic debut with English National Opera in 2011 as American Suburban Girl in Nico Muhly's opera Two Boys. In June 2013 Rosie returned to ENO to play the joint roles of Lucy and Josh in Philip Glass's The Perfect American, having performed at its world premiere in Madrid in January 2013. She also performed the role in Brisbane Festival in September 2014.

Other operatic roles include Flora in The Turn of the Screw with Holland Park Opera (July 2014) and at the Festival di Spoleto (June 2012), First Witch and Second Woman in Dido and Aeneas (Ad Parnassum), Cupid in Venus and Adonis (Ad Parnassum) and Bastienne in Bastien & Bastienne with Opera Alegria (February 2015).

This concert will see the return of the delightful soprano to Tabley with a concert of exquisite and entertaining period music. Rosie's first concert at Tabley was an immense success and was enjoyed by all those who attended.

Wine and canapes will be served.