Kirsty McGee and the Hobopop Collective: No.5 Album Launch 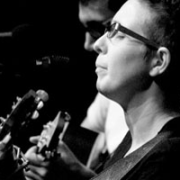 Kirsty McGee recorded her new album No.5 live in one take in front of a sold out audience at her native Manchester’s Contact Theatre last October. It’s the first album to feature Kirsty with her full band The Hobopop Collective – the decision was made to record it live with no overdubs or repairs as the best way of capturing their sound.

Now Kirsty and the Collective return to the venue they recorded in for a celebration of the album's release (scheduled for March 15th 2010) performing songs from the album and more, with a selection of guests in tow.

This is your only chance to get a copy of the album a full two weeks before it is released. Book early, tickets will not last long for this show.

Praise for The Kansas Sessions:

'Shivering, hollering, edgy, dark, delightful, disturbing, involving, beautifully phrased acoustic music.' – The Living Tradition 'Perfect understatement - not an extraneous word or note.' - Karine Polwart 'Absolutely superb, memorable... I love her songs.' - Bob Harris ‘A wonderful voice.’ – Mike Harding 'A quiet triumph.' - Folk Roots 'A fine album, and possibly her best so far' **** - Rock n' Reel 'A stunning musical masterpiece that is up there with the best of Eilen Jewell, Devon Sproule and Amy Lavere.' **** - Maverick 'The kind of voice that stops you dead in your tracks. She blends styles like a master alchemist and has a way with melody that means the moment you hear her songs it's impossible to get them out of your head.' - Ralph Mclean, BBC