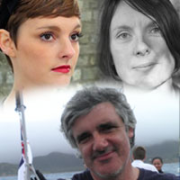 Gregory O’Brien is a New Zealand poet, art-writer, essayist and painter, whose books have been published widely in Australia and the United Kingdom, as well as in his homeland. Carcanet (UK) published his 1994 poetry collection, Days Beside Water, and his book-length essay News of the Swimmer Reaches Shore (2007). His most recent collection of poems, Beauties of the Octagonal Pool, appears from Auckland University Press in February 2012. O'Brien is also a widely exhibited painter and, in May 2011, co-ordinated an artists' trip to the remote Kermadec Islands, North of New Zealand, and co-edited the book, Kermadec which was one outcome of that project.

Rebecca Perry graduated from the Centre for New Writing in 2008 with a master's degree in Creative Writing, and now edits children's books in London. Rebecca has had work published, most recently, in New Welsh Review, Smiths Knoll and The Rialto. She recently contributed to This Line is Not for Turning: An Anthology of Contemporary British Prose Poetry (Cinnamon Press). Her pamphlet Little Armoured is being published by Seren in February 2012. In November 2011, Perry won a Highly Commended prize in the international writing competition, The Bridport Prize, one of the most prestigious open literary awards in the UK.

Rachel Connor writes fiction, non-fiction and radio drama. Her debut novel, Sisterwives, was published last year by Crocus Books and she is now at work on another. A former lecturer in English and American literature at the Universities of Glasgow and Salford, Rachel now combines writing with working for the Arvon Foundation at its Lumb Bank centre.