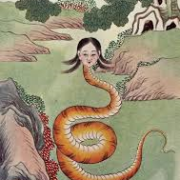 Lihui Yang is a Professor of Folklore and Mythology at Beijing Normal University and author of ‘The Handbook of Chinese Mythology’. Written from an exclusively Chinese perspective, this is the most comprehensive English-language work ever written on the subject. Based on Yang’s long-term research into Chinese myths and mythology, this lecture will explore myths that have existed in China for thousands of years and explain how they are spread and reconstructed among Chinese people today. She will portray the rich diversity of Chinese tradition and illustrate a unique picture of China from a native mythologist's perspective. Her research sources include myths told by pilgrims at the Renzu (meaning “human ancestors”) Temple Festival in Henan Province; myths used by tour guides in the local tourism industry at Wahuang Palace in Hebei Province; as well as myths reconstructed in films, TV cartoon shows, and computer games. Yang’s insights, based on her field research, capture so well what Chinese mythology means to the people who lived and continue to live their lives by it.

Role: Professor of Folklore and Mythology