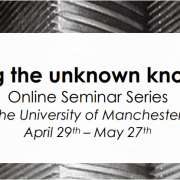 Making the unknown knowable has always been located at the heart of scientific activity. Yet, whether the goal is to understand extreme environments, outer space or the universe (Helmreich, 2009; Messeri, 2016; Galison, 2020), to transform uncertainties into calculable risks (Sarewitz, 2000; Brown and Rappert, 2017), to make futures present and actionable (Harding and Rosenberg, 2005; Galison and Moss, 2015; Beckert, 2016, 2018; Saraç-Lesavre, 2020), to characterise contamination, toxicity or pollution (Tousignant, 2018; Alexander and Sanchez, 2020; Gramaglia, 2020), to establish the causes and effects of human intervention on Earth and its inhabitants (Bonneuil and Fressoz, 2013; Chakrabarty, 2018; Yusoff, 2018) or to comprehend bodies, diseases and pandemics (Cohn, 2004; Stark, 2020), this activity has never been as equipped and mediated as it is today. Knowledge institutions, civil society organisations and ordinary citizens engage with a myriad of methods, tools and technologies to collect and analyse data; sometimes it is microbes, plants, and individuals (Paxson, 2008; Kelly and Lezaun, 2014; Houdart, 2017), and other times it is sensors, scenarios, algorithms, robots, tests, novel analytical and methodological approaches or previously inaccessible archives that mediate the approaching of uncertainties and unknowns (Gusterson, 1996; Saraç-Lesavre and Laurent, 2019; Marres and Stark, 2020).

The production of knowledge about the unknown is not only a fascinating activity in that it involves pushing the limits of human knowledge, but the analysis of its modalities also tells us a lot about the nature and forms of scientific collaboration (Latour and Woolgar, 1979; Traweek, 1988; Galison, 1997; Vertesi, 2015), political economies in which these collaborations take place (Birch and al. 2020), multispecies engagements (Haraway, 2008; Kirksey and Helmreich, 2010; Mélard and Gramaglia, 2019), modes of conflict and cooperation among humans and non-humans (Tsing and al., 2017), definitions given to ‘responsible’ action under the conditions of deep uncertainty (Dupuy, 2009; Haraway, 2016; Saraç-Lesavre, 2020), forms of injustices (Voyles, 2015; Liboiron, 2021), and the identity of those who hold the capacity to access information and to produce expertise in advanced industrial societies (Galison and Moss, 2008; Oreskes and Conway, 2011; Galison and Proctor, 2020). This seminar series will be inquiring into the ways in which the unknown is rendered knowable by a wide range of actors in a multitude of contexts. It aspires to generate a fruitful discussion among three concerned groups; those who produce knowledge on the unknown (scientists and engineers who work within academic institutions and industry, regulatory instances, civil society organisations), those who seek the limits of the known be extended to undertake policy action (regulatory instances, policy-makers), and those who study how the unknown is made knowable (historians/sociologists of sciences/technology, human geographers, philosophers of sciences, anthropologists of science/technology, STS scholars…).

Abstract: In the small town of Tôwa, Fukushima Prefecture, Japan, about 50 km from the Fukushima Daiichi nuclear power plant, residents stayed in their home after a disaster in March 2011 substantially altered the composition of their environment. A magnitude 9 earthquake off the coast of Tohoku triggered a tsunami that left more than 18,000 people dead and missing, and led to a level 7 nuclear accident. The radioactive plume escaping from the damaged reactors spread to more than 100 km, creating random pockets of contamination on the territory. Riddled with these "leopard spots", the Tôwa Valley was not considered sufficiently contaminated, however, for an evacuation of the population to be considered. Since then, they have learned to live with radioactivity, measuring but also observing its behaviour, the way it moves, where it tends to concentrate, what it tends to cohabit with, what it tends to attach to. In this presentation, I will focus on what is articulated in the empirical frequentation of a place like Tôwa by farmers, agronomists, or social scientists. I will try to describe how knowledge of what is happening in a radioactive regime can only be produced by the intimacysation, so to speak, of the links that unite people to contaminated places.

Abstract: The Sierra Minera of Cartagena is a former mining territory located in the South-East of Spain. If the extraction of lead started in pre-Roman times before stopping in the 1990s, the scars of the last decades of exploitation are the most visible. Minerals have long been extracted underground and artisanal, but in the 1950s, Penarroya bought most of the concessions and opened the first open pits. Technical innovations have led to the intensification of extractive practices, transforming the soil into a succession of holes, acid lakes and piles of reddish tailings. Today, the Sierra covers an area of 10 km2. There are about 80 piles of uneven-sized tailings, not rehabilitated. The erosion precipitates residues in the nearest towns and villages.

This talk discusses the fate of residues, whose toxicity has long been ignored, before being the subject of controversy, since a scientist analysed dust samples taken from school yards then children’s nails and hair. I retrace the trajectory of the alert which made it possible to understand residues dispersion as well as their transformation into salts that are particularly bioavailable. I focus on the almost "chemo-ethnographic" investigation, which has since been conducted with residents on several fronts to 1. locate this efflorescence and make visible the threat they pose, and 2. ask the question of their existence, in a form and in places where their harmfulness is increased, on a political level. I conclude with some of the ideas that the coalition has formulated to reduce exposure, allowing survival in ruins.

May 25th Prof Jens Beckert, Max Planck Institute for the Study of Societies

Abstract: In a capitalist system, consumers, investors, and corporations orient their activities toward a future that is open and uncertain. How do intentionally rational actors make decisions when the future is unknown? In the talk, I attempt to demonstrate how ‘fictional expectations’ drive modern economies or throw them into crisis when the imagined futures fail to materialize. Collectively held images of how the future will unfold are critical because they free economic actors from paralyzing doubt, enabling them to commit resources and coordinate decisions even if those expectations prove inaccurate. Since they are not confined to empirical reality, fictional expectations are also a source of creativity in the economy. The talk is based on my book "Imagined Futures. Fictional Expectations and Capitalist Dynamics" (HUP 2016) and the volume “Uncertain Futures. Uncertainty, Imaginaries and Calculation in the Economy” (OUP 2018), co-edited with Richard Bronk.