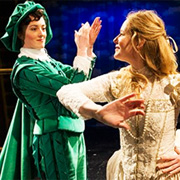 Tirso de Molina's work, and particularly Don Gil de las calzas verdes, explores various complexities of gender and identity by stretching to its limits the trope of 'woman-dressed-as man'. This talk will deal with the textual, performative, and philosophical implications of Tirso’s approach, while locating it in an overarching tradition of mass entertainment; it will also bring up to the debate essential issues such as city living and ongoing problematizations of masculinity.