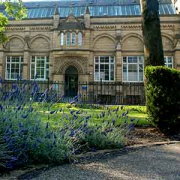 Venue: Holden Gallery, MMU’s All Saints Campus. 11am – 12.30pm, FREE, no booking necessary. The Tuesday Talks series are a collaboration between the Whitworth and Manchester Metropolitan University. While the Whitworth transforms into a 21st century gallery in the park, the talks will be held at MMU. The Tuesday Talks invites leading artists, thinkers and curators to explore the driving forces, influences and sources of inspiration within contemporary art and is programmed by Professor Pavel Büchler and Bryony Bond.

Frederik Vergaert is an artist and the artistic director of Lokaal 01 in Antwerp and Breda since 2003.  Lokaal 01 offers fourto five week residencies for emerging artists, critics and curators. Participants are invited, or selected from a proposal, and have the use of the space and facilities for the duration of their residency, which culminates in a three day public presentation. Vergaert has made more than 80 exhibitions in and outside the buildings of Lokaal 01 and worked together with over 250 artists. He is also involved in several experimental ‘off projects’ in collaboration with artists and runs the new residency-program of the Middelheimmuseum. For more information visit: www.lokaal01.org

Details of past talks this season:

Leah Gordon is an artist and curator and has produced a body of work on the representational boundaries between art, religion, post-colonialism and folk history. Her photographic work often registers junctures between history, cosmologies and the present, with specific references to the Industrial and Haitian revolutions. Gordon’s film and photographic work has been exhibited internationally including the Museum of Contemporary Art Sydney; the National Portrait Gallery, UK; Parc de la Villette, Paris and the Dakar Biennale. Her photography book Kanaval: Vodou, Politics and Revolution on the Streets of Haiti was published in June 2010. She is the co-director of the Ghetto Biennale in Port-au-Prince, Haiti, was a curator for the Haitian Pavilion at the 54th Venice Biennale, was the co-curator of Kafou: Haiti, History & Art, at the Nottingham Contemporary and on the curatorial team for In Extremis: Death and Life in 21st Century Haitian Art shown at the Fowler Museum, UCLA in 2012 and at the Musées de la Civilisation, Quebec City in 2013. Leah Gordon is represented by Riflemaker Gallery.

Gilane Tawadros is the Chief Executive of the DACS Foundation, a not-for-profit visual artists’ rights management organisation. Prior to this Tawadros was the founding Director of the Institute of International Visual Arts (inIVA), a contemporary visual arts agency in London and joint Chief Executive of Rivington Place (a RIBA-Award winning £8m building project). She has curated numerous exhibitions in the UK and abroad and has written extensively on contemporary art, including The New Economy of Art (DACS/Artquest, 2014), Changing States: Contemporary Art and Ideas in an Era of Globalization (inIVA, 2004) and Life is More Important Than Art (Ostrich, 2007). She currently sits on the Boards of EVA (the European Visual Artists Association), Camden Arts Centre, Matts Gallery, London Film and Video Umbrella and the editorial board of the Whitechapel Art Gallery. Until the end of 2010, she was President of the Board of the International Foundation Manifesta - an organisation based in Holland that is a pan-European platform for the contemporary visual arts and acting Chairman of A Foundation (Liverpool and London).

Jamie Shovlin’s work is often concerned with the balance between truth and fiction. He first received international recognition in 2004 when he staged an exhibition based around the drawings of disappeared schoolgirl Naomi V. Jelish. Supporting newspaper cuttings and diaries were displayed alongside the artworks and the full archive was purchased by contemporary art collector Charles Saatchi. Halfway through the exhibition Shovlin revealed that the archive was in fact false and that Naomi V. Jelish was an anagram of his own name.?In 2006, Shovlin created another exhibition based on the memorabilia of a non-existent German glam rock band called Lustfaust. This project was supported by a network of fake websites created by Shovlin and earned him a nomination for the Beck’s Futures prize. ?His recent exhibition Hiker Meat, about an exploitation film that never existed, was on display earlier this year at Cornerhouse, Manchester.

Kevin Hunt is based in Liverpool, working on a number of curatorial projects alongside his practice as an artist. He was a director at The Royal Standard, an artist-led gallery, studios and social workspace between 2007 and 2011, co-founded CAVE, Liverpool's inaugural contemporary art fair presented during the opening weekend of Liverpool Biennial 2012 and was nominated for the Liverpool Art Prize in 2013. More recently he co-curated MODEL, a temporary, flexible platform for artist-led activity coinciding with Liverpool Biennial 2014 during which he was also artist-in-residence, presenting A GRAND FINALE, a live performance at the Old Blind School on the final day of the festival.

Artist Steve Van den Bosch's work has been described as balancing "between invisibility and straight materiality". His often minimal works are concerned with the artwork's periphery and with following the sometimes faulty outcomes of linear reasoning. Van den Bosch graduated from the Rijksakademie, Amsterdam in 2007. Recent  solo exhibitions include No Notion of None (2013) and Quote Unquote (2011) both at galerie van der Mieden, Antwerp, and group exhibitions 50 Days at Sea, Antwerp Pavilion, curated by Philippe Pirotte at the Shanghaï Biennale; Witte de With, Rotterdam; Kunsthalle Bern, Bern and the  Contemporary Art Museum St. Louis, USA.

Martin Boyce studied Environmental Art at The Glasgow School of Art from 1987 to 1990, before completing an MFA in 1997. Boyce has exhibited internationally in group shows such as Modern British Sculpture at the Royal Academy, London (2011) and Nettverk Glasgow, Oslo (1998). His solo shows include his critically acclaimed installation at Tramway, Glasgow (2002) and an exhibition at The Fruitmarket Gallery, Edinburgh (1999). In 2009 he represented Scotland at the 53rd Venice Biennale with No Reflections and in 2011 he was awarded the Turner Prize. He lives and works in Glasgow.

Khadija von Zinnenburg Carroll is a British Academy Newton Fellow based in London. She is the author of Art in the Time of Colony, a museum in a book. Her recent exhibitions include Botanical Drift at Kew Gardens London, Ore Black Ore at Kunstaal Antwerp, 40,000 Years of Modern Art: A re-enactment at the Institute of Contemporary Art London, Embassy Embassy at Haus der Kulturen der Welt Berlin, and Investigated at Savvy Contemporary Berlin. For more information visit: www.kdja.org