On The Origin of the Milky Way 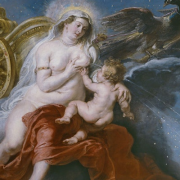 On The Origin of the Milky Way (1637) by Peter Paul Rubens: Astronomy, Astrology and Mythology in early modern Europe

Video pre-recorded and available on The University of Manchester Portal:

Painted for Philip II's hunting lodge at the Escorial in the final decade of his life, Rubens's autograph work The Origin of the Milky Way defies ready interpretation. The artist was a contemporary of Galileo, the two men had friends in common even though attempts to evidence a meeting between the two have so far failed. Rubens was also one of the first to introduce a telescope into a painting (in Allegory of Sight with Jan Brueghel the Elder). He had already painted a series of night skies and an eclipse. He had many recent books on astronomy/astrology, as well as ancient texts, in his unparalleled library. This is a painting full of convincing, but none quite fits into recognised constellations. Nor does the image accurately accord with any known mythological narrative. So, is the Milky Way here simply an excuse to depict Juno as Queen of the heavens? I propose that Rubens was a learned eclectic for whom Aristotelian views of the cosmos could meld both with contemporary earth-centred arguments about a providential universe and with new Copernican theories. Uniting his lifelong interest in pictorial space with newfound possibilities for understanding the cosmos, Rubens draws on the ancient Roman concept of ‘Sparsio’, or abundance, with which he would have been familiar through his friendship with Hugo Grotius as well as through his collecting of antiquities. Executed a few years after the fifty-three-year-old artist had married his second wife, then aged sixteen, with whom he had a series of children in rapid succession, The Origin of the Milky Way constitutes a witty and profound meditation on female generosity within a framework of universal laws.

Marcia Pointon is a graduate in English and History of Art from Manchester University and, following seventeen years at the University of Sussex, held the post of Pilkington Professor of History of Art at Manchester from 1992 to 2003. She has published many books and articles with interests ranging from landscape to Victorian subject painting, from gender in representation to problems in portraiture. Her work on eighteenth-century English portraiture led her to question the significance of precious stones in images. It was an invitation in 2014 to give a short paper on jewels in Rubens's art that precipitated a major change of direction and to her immersion in Northern European early modern art and science. Her recent publications include 'Peter Paul Rubens and the Mineral World', Artibus et Historiae, 2019 and 'Rubens and Peiresc in Search of Agate: Materiality and Aesthetics in Early Modern Europe', Art History, November 2020.