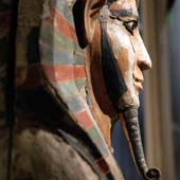 In this Academy Award nominated epic story set in ancient Egypt, Pharaoh Ramses XIII defies tradition by assuming command of the military, a post usually occupied by priest. His defiance leads to a battle between those loyal to Ramses XIII and the power structure of priests. The priests try to fool the people by capitalizing on a solar eclipse, but Ramses XIII realizes the event is only a natural phenomenon. Impressive battle scenes and periods costumes from ancient Egypt add to this colourful epic historical drama.

The screening is organised in partnership with the Polish Cultural Institute in London.

With an introduction by Dr. Campbell Price, Curator of Egypt and the Sudan, Manchester Museum.