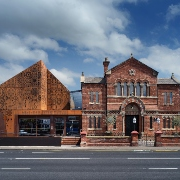 The University of Manchester’s internationally-acclaimed String Quartet-in-Residence bring their music to the Manchester Jewish Museum, with quartets written in memory of lost sisters. Felix Mendelssohn’s Op.80 was his last major composition, completed just two months before his death in 1847. It was written in tribute to his sister, the composer Fanny Mendelssohn, who herself died earlier that year. (Fanny Mendelssohn’s String Quartet is featured in the Quatuor Danel lunchtime concert at the University on 23 February. Do join us for that as well!)

In 1939, Mieczys?aw Weinberg and his sister Ester fled from the Nazi invasion of Warsaw to the USSR. Mieczys?aw went on, Ester turned back. The two would never see one another again. Weinberg’s Quartet No.16 was written in memory of his sister in 1981.

The Quatuor Danel will be introduced by the University of Manchester’s resident Mendelssohn expert, Professor Thomas Schmidt.