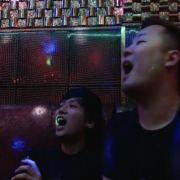 This talk and film screening will explore how we can understand young Chinese mobilities beyond frameworks such as community and migrant identity. In doing so, he will also discuss the role visual research can play in deconstructing the taken for granted analytical categories we use in migration research.

This research film, Tokyo Pengyou, examines how experiences of mobility spur young Chinese people living in Tokyo to reassess their understanding of politics, identity, friendship, and success. Developed from a wider project of 4 years ethnographic fieldwork among young Chinese people living in Tokyo, the film follows two young Chinese musicians who met each other in the nightlife spaces of Ikebukuro. Two young sojourners turned philosophers contend with the competing expectations of living abroad within this film, alongside the vicissitudes of getting along in Japan’s emergent communities of recent Chinese migration. Through this exploration, the film portrays how two people have responded to the ‘cruel optimism’ of mobility, alongside continuities and changes in how young Chinese people construct a sense of 'being at home in the world'.