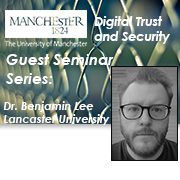 This lecture traces some strands of organisational thought emanating from the extreme right and considers the impact of an emerging extreme right digital milieu on trust. The extreme right has long had a problem with trust and the threat of attack or suppression has been in a key factor in how groups organise. The arrival of digital technology has increased resilience, shifting the participatory focus from easily targeted hierarchical organisations, to a more robust digital milieu. However, the declining role for organisations has removed sources of ideological authority, forcing supporters to make difficult decisions about who and what to trust. Likewise, the relative anonymity of digital activism has increased the threat from infiltration. The lecture concludes by speculating, based on contemporary examples, about some of the strategies that may be used to solve trust problems on the extreme right in the future.

Biography: Benjamin Lee is a Senior Research Associate at the Centre for Research and Evidence on Security Threats (CREST), based at Lancaster University, UK. His research interests include the intersection of digital technology and political extremism. He has published work on technology and extremism, conspiracy theories, counter messaging, and the counter jihad movement.