Made in Manchester: Storytelling and spoken word performance 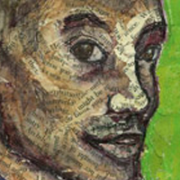 Professional performer and storyteller Akiel Chinelo has been facilitating a series of drama and storytelling workshops with a group of young women from Gorton in east Manchester. They are supported by Mancunian Way (http://mancunianway.org.uk/) an organisation that was set up to address issues of anti-social behaviour in Manchester. Working alongside Akiel has been Lucy Sparks, Erin Power and Rosie Phillips, three recent graduates from the BA Drama course at the University of Manchester, and together with the young women they have been exploring the idea that ‘Manchester made me’.

The young women have named their group ‘Girls don’t crime’ and through drama and storytelling they have been tracing their family histories and sharing stories and ideas about how living in Gorton has shaped them. Using costume alongside family memorabilia they have been working together to create a short performance about their experiences, telling stories about change, inter-generational journeys and, ultimately, about their aspirations.