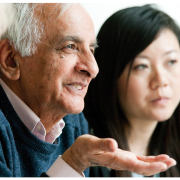 Religion has been identified as playing an important role in the lives of older people. Spiritual beliefs may themselves be an important means of coping with many of the stresses and pressures which face older people. But the role of religion may be undergoing substantial change with greater variation in views amongst old and young alike concerning existential questions about the meaning of ageing and death. This seminar will explore some of the key issues about the place of religion in the context of ageing societies, examining both the doctrines that underlie the churches’ engagement with older people, their contribution to wellbeing in later life, and the future role of the church in evangelising new generations of older people.