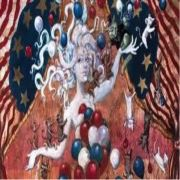 Zoe Trodd is Professor of American Literature in the Department of American and Canadian Studies at the University of Nottingham, co-director of the Centre for Research on Race and Rights, and director of the research priority area in Rights and Justice. She researches protest literature and visual culture, especially of antislavery. She recently addressed the European Parliament about its antislavery policy. Her books include American Protest Literature (2006), To Plead Our Own Cause (2008), Modern Slavery (2009), The Tribunal (2012), Civil War America (2012), and Picturing Frederick Douglass (2015).