The Sting of Passion 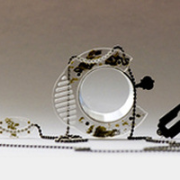 A University of Manchester researcher who uses powerful industrial lasers to create unique jewellery designs is having her latest work shown in a new exhibition at Manchester Art Gallery.

Sarah O'Hana has just completed a ‘first of its kind’ PhD in the Manufacturing and Laser Processing Group, looking at the creative use of laser processing and its application to contemporary jewellery. During her four years of study, she rubbed shoulders with engineering colleagues investigating laser processing for use in areas like surface engineering and cutting, welding and drilling processes. But her interest was in the aesthetic potential of this equipment, of building links between artists and scientists and also pioneering new processes for the creative industries.

Her research, which took place in the School of Mechanical, Aerospace and Civil Engineering (MACE) focused on the colours and patterns that can be created when lasers are used on materials like titanium. And now one of her pieces is appearing in a new exhibition at Manchester Art Gallery of contemporary jewellery by 12 up-and-coming international jewellery artists.

‘The Sting of Passion’ features new conceptual works of jewellery by artists from as far afield as the USA and Mexico. All the works on display have been inspired by Pre-Raphaelite paintings from Manchester Art Gallery’s prestigious collections.

The paintings have all been selected by the exhibition curator, Jo Bloxham, and include Pre-Raphaelite favourites such as Arthur Hughes’ Ophelia and Rossetti’s The Bower Meadow and Astarte Syriaca.

Sarah’s piece – called Prism 20 – is made from acrylic, silver, stainless steel, gold leaf and brass and is inspired by a painting called At The Golden Gate by Valentine Cameron Prinsep, which was painted in around 1882 and is now housed at Manchester Art Gallery.

The painting takes its theme from the Bible - the Wise and Foolish virgins. In the parable, the five virgins who are prepared for a bridegroom’s arrival are rewarded and the five who are not prepared are excluded. According to the story, the Foolish Virgin who wasted all the oil in her lamp is locked out of a wedding feast because she could not find her way in the dark.

Sarah says: “I have given her two things to alleviate her plight. The first is a keyhole so that she may at least catch a glimpse of the wedding celebrations and maybe even attract someone’s attention to be let in. The other is a correcting prism to peer through. She casts an angular glance at the door so the lens can be rotated in order that the image on the other side can be moved to suit her.

“I like to draw some parallels with her position at the gates - a similar concern drives my enquiry into other disciplines, usually difficult to access. The richly decorated but forbidding golden doors create a growing curiosity over what might be on the other side. The disappointment visible in the woman only adds to this frustration, so I hope that the instruments that she now owns will help unlock this and other restricted territories.”