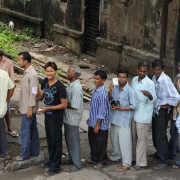 The Global Development Institute Lecture Series is pleased to present Dr Indrajit Roy, Department of Politics, the University of York to discuss "Dignifying development: Democratic deepening in an Indian State."

The lecture draws on Indrajit’s prior work on poor people’s negotiations with democratic institutions and public policy as well as their ideas about citizenship and membership in its political community. It also signals his future research plans of investigating the intersections of democracy and development in the Rising Powers and other emerging markets.

The lecture is a contribution to emerging perspectives on factors that deepen democracy. Against arguments that emphasise the role of economic development, elite bargains and cultural modernisation, Indrajit urges us to take seriously the role of the politics of dignity in democratic deepening. Drawing on the case of the eastern Indian State of Bihar, he directs attention to the ways in which political mobilisation of ethnic identities- underpinned by narratives of dignity espoused by members of oppressed social groups- enable democratic deepening in an economically and socially hostile climate. The causal analysis offered in this paper pluralises the class-centred account of social forces originally developed by Barrington Moore Jr (1966).

This event is open to members of the public and information on the accessibility of the venue is detailed at this link: https://www.disabledgo.com/access-guide/the-university-of-manchester/simonth-a

Organisation: The University of York

Biography: Indrajit is Lecturer in Global Development Politics at the University of York’s Department of Politics. His research interests centre on the political ideas, identities and practices that animate and are incited by ‘development’. These explorations have enabled him to investigate the entanglements between political change ad social transformation and stage exciting conversations between emerging literatures on: citizenship and democracy; mobility and modernity; and the rising powers and transforming politics of international development.