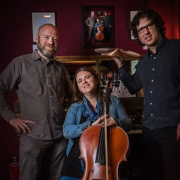 Shirley's trio draws on her eclectic background to bring together her jazz, blues and world music influences.

Equally at home in jazz, Middle Eastern, and classical music, Shirley Smart is recognised as one of the UK’s most versatile and creative cellists. She is joined by John Crawford, one of the UK's leading jazz pianists, who shares her interest in Latin and world influenced jazz, and long term collaborator, and flamenco master Demi Garcia Sabat.

Their first album 'Long Story Short' was released in 2018 to critical acclaim.

"..some of the most inventive use of the cello I’ve heard for some time." Kind of Jazz

"Smarts playing is particularly remarkable throughout. She readily demonstrates a wide range of techniques incorporating an understanding of improvisation drawn from a jazz background and her extensive knowledge of Arabic maqam.." Songlines

This concert is part of the Musica Festival, Celebrating Female and Non-Binary Music Making.